In a small bowl, mix together the garlic, cinnamon, cloves, salt and pepper. Make frequent deep slits around the meat and fill them with some of the garlic mixture, pressing it down inside the meat until it is all used up. Heat the oil and butter in a large ovenproof casserole and seal the meat until lightly brown all over. Take out the meat, add the onions and stir until they start to colour. Put the meat back into the saucepan and add enough hot water to come just below its top surface; then add the tomato puree and salt and pepper. Cover and cook slowly, turning the meat over frequently and stirring the onions to prevent them sticking, until the meat is tender – about one and a half hours. Alternatively, cook in a pre-heated oven, at 170 degrees Centigrade for 2 hours, turning the meat and the onions occasionally. When the meat is tender, put the dish on the hob, slowly pour the vinegar over the meat and let it bubble uncovered for 5 minutes, guarding against the onions sticking. By then, there should be a deliciously reduced sauce, smooth and sweet with the melted onions. If not, take out the meat and cook the sauce, uncovered, rapidly until it is reduced. Discard the string, slice the meat and put it back into the sauce. Cook the spaghetti until al dente. Serve immediately with the sauce over the pasta and the meat on the side. 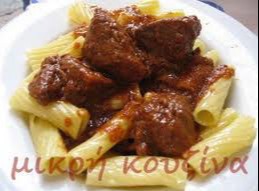 Wash the cleaned fish and sprinkle with salt. Sauté the chopped onions in half the olive oil for about 10 minutes until soft. Then add the garlic, tomato paste, water and red and black pepper, and simmer for half an hour. Heat the rest of the olive oil in a separate pan and brown the small stewing onions. Add the onions, fish and potatoes to the sauce and simmer for about 20 minutes. Serve sprinkled with chopped parsley. 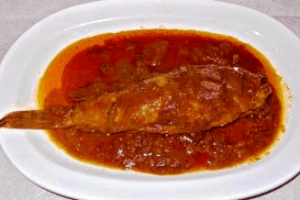 Heat the olive oil in a pan and saute the garlic. When it becomes slightly brown add some water, the fish and the potatoes and simmer. Season with salt and pepper. Simmer slowly until the fish is cooked and the potatoes are tender, adding a little water from time to time. (Add the water gradually in order to ensure that the sauce will remain thick until the end.) Remove from the pan, serve onto plates, pour some lemon juice over each portion and garnish with a wedge of lemon. 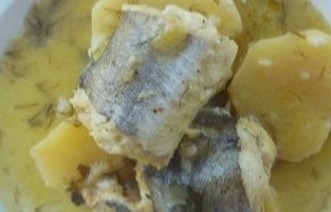 In a frying pan large enough to hold the strips of meat lengthwise, add a little oil and bring it to a high heat. Put the flour on a large plate, dredge the strips of meat, and brown on both sides. Place in a large pot and set aside. In a clean frying pan, add two tablespoons of oil and bring to a medium heat. Saute the garlic and parsley. When the garlic starts to change color and the parsley wilts, add the pepper, salt, wine, and vinegar. Stir well and pour over the meat. Add enough water to the pot to barely cover the meat. Holding the handles, shake the pot gently to mix the ingredients without stirring. Cover and cook over a medium-low heat for about 1 hour and 15 minutes. At the point where it comes to a boil, add the rosemary and shake the pot gently. 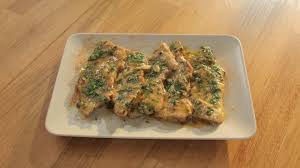 Mix all ingredients with water to create a loose dough, like a porridge, let it rise, heat up olive oil in a frying pan, put spoonfuls of our dough into the frying pan, fry them until golden brown on both sides and put them on kitchen paper to absorb the oil. Serve with powder sugar and ground cinnamon. 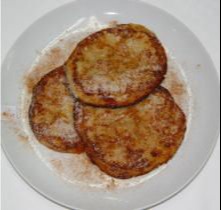 Download our mobile application for free. Works only with Android devices. The version for the Apple devices will be announced in the near future.